My name is Sonny and I'm 3. My favourite programme is 'Hungry Bear Tales' on RTE Jr at 1pm. There are lots of different bears and they are always hungry. Sometimes they make mistakes and trouble trying to get the food. I eat my yoghurt when I watch it and it makes me laugh. I just like it because I do and I don't like films.

I'm Florence and I'm 5 years old. I love watching 'True' on Netflix. She has a friend named Cumulo who is a cloud and Barnaby is a navy cat. He hates water, the same as real cats. True lives with Barnaby and Cumulo lives with his cloud family up in the sky because he is a cloud. They rescue people in all the episodes. I love it because its fun to watch and I sing with the music.

Now weren't they very special reviews - well done to Sonny and the Florence on doing such a great job.

Posted by realboyle.com at 12:00 AM No comments:

Welcome to another Tadhg TV takeover

So it is my pleasure to hand you over to Hallie and little Tommy Commons.

My name is Hallie Commons. I am 8 years old. I will be 9 next month. One of my favourite programmes on Netflix is called  “Nailed It”. It’s a baking show, the contestants make cakes and whoever “Nails it” and makes the best cake wins the money.

When I am allowed to, I love to watch a YouTube channel called “Funnell Vision” They are a family and they upload videos of themselves every day. They live in America and they go on lots of trips like Hawaii, Disney World and Legoland. I like watching to see what they get up to. My favourite singer and dancer is JoJo Siwa and I also love Hannah Montana.

I am Tommy and I am 6 years old. I like watching “Sponge Bob SquarePants”. SpongeBob lives under the sea. Patrick is his best friend and Squidward is also his friend. SpongeBob works in the Crusty Crab he makes Crabby Patties and cleans up and he chats to Squidward over the counter. SpongeBob is a funny show because he is a sponge and he can suck up water and change his body into different shapes like triangles and squares.

My favourite movie is Charlie and the Chocolate Factory. This movie is about a little boy and his family. They are poor. He buys a Wonka bar with money that he found in the snow. He wins a golden ticket inside the Chocolate bar. He gets to go to Willy Wonka’s Chocolate Factory tour, inside the factory it is weird and wonderful. The other kids who won the tour were bad children and end up in bad places. At the end Charlie was the best child and gets to live in the factory happily ever after.

This week Emmet Sheerin and Sennan Sheerin are taking over blog

It's about a kid who gets a job becuase he needs money and he wants money so he gets a job in junk and stuff and then he says "can I get a job here",  and someone says go to the back  and up and down on an elevator, and he made someone who is listening to music with headphones on, and he reveals a secret  and says he is Captain man and that he wants a sidekick  and the kids choose as the sidekick

Pets United is about a dog that becomes a stray because he loses his owner, because he's on a leash and then he is pulling on it and the leash snaps,, when do dog becomes a stray he has to steal food to survive but there are robot police, and he always OutRuns  them and at the end of the movie he finds his owner again.

• And Emmets choices are

Basically  2 twins Dipper and Mebal, move to Oregon to a place called Gravity Falls to live with their eccentric uncle Stan who runs a tourist shop called Mystery Shack, Dipper finds an old book in the forest, it  has a bunch of weird manuscripts and that like how to defeat zombies and stuff, so he goes back to the shack and starts feeling he is being watched by something meanwhile, Mabel gets a boyfriend for some reason and Dipper is convinced that he is a zombie so he starts spying on them he thinks he is beaten until he sees  in a video the dudes hands fall off and you pick them up and he has to put them back on.

It starts off with Thor  and the Asgardians on a ship they got at the end of Ragnarok, and then Thanos  comes on and slaughters like all of them
Hulk tries to be beaten up but Thanos ends up destroying Hulk. He ends up killing Loki and Thor ends up floating in space
At the end Thanos ends up snapping  his fingers with all the infinity stones and everybody turns to dust.

You play as an old animator called Henri Stein, he goes back to his old friends Joey dreams animation studio and then you'll see some weird machine called the ink machine

He follows you around in chapter 3

As you can see the boys did a brilliant job, ... Well done lads

Posted by realboyle.com at 12:08 AM No comments:

Hello and welcome to Tadhg TV
Now this week its another Tadhg TV takeover.
This week its the legend  himself Donnacha Kiernan who is the big 9
Sky cinema
Spiderman Homecoming
Spiderman got a new suit and joins the Avengers and all the  high school students
His friend goes insane for half of it ... funny, half-serious
Ha one of the best movies
Call of the wild
It's the best movie I went to see with Eoin Kearney (another legend)
It's about a dog that gets lose and keeps finding this man and it risks his own life to save the man's life
Now as you can see Donnacha did a brilliant job.
That's it for this week
Stay safe, please
Tiger
Posted by realboyle.com at 10:51 AM No comments:

You are all very welcome to Tadhg TV
This week the Kennedy family are taking over, so I am now going to hand ya over to the kids for some great recommendations.
Róise
Age 8
I have 3 favourite TV shows:
1. Alexa and Katie (Netflix)
This is about a girl living with leukaemia (Alexa) and her best friend Katie. It is very funny. My favourite character is Alexa.
2. JoJo Siwa (YouTuber)
JoJo Siwa is a YouTuber. I love all of her shows & her bows. She is also a singer.
3: The Thundermoms (Nickelodeon)
The Thundermans is a Nickelodeon TV Show on Netflix. It's about a family of superheroes who moved to a new town to live normal lives. My 2 favourite characters are Phoebe and Nora.
And I forgot 1 more... Grace's world on YouTube. It is really funny as she makes little movies with Barbie's. There is a new video every week. It is very funny. Even Mom & Dad really like this one!
Caitlín Kennedy
Age 10
I don't really like watching TV but there are 2 things I like to watch.
1: F2 Freestylers ultimate soccer skills channel. The "F2 Freestylers" are a soccer duo formed by Jeremy Lynch and Billy Wingrove. They are semi-pro footballers from England. I think they are very good YouTubers because they do skill schools. They are very interesting.
2: Modern Family (Amazon Prime/Netflix)
I LOVE Modern Family because it is really funny and entertaining. It is an American TV show about life of a big family in LA. I really recommend it. My favourite character is Lily. We ALL love watching this. Dad loves Phil & Mom loves Cam & Gloria. Róise's favourite is Alex.
Ruadhán Kennedy
Age 12
I mostly watch YouTube apart from Modern Family!
1: I watch Sky Sports Football Highlights - This is just highlights from the Premier League matches.
2: YouTube - Virgin Media: Ant & Decs Saturday Night Takeaway - Ant & Dec play games, chat to celebrities & my favourite is when they prank people by going undercover.
3: RTE 2 - RTE Player. Euro 88. RTE look back on Ireland's performance in the 1988 European Championship in West Germany. I loved looking back at the old footage.
Tá muid ag súil GO MÓR le peil, iománaíocht & camógaíocht beo a bheith ar ais go luath ar an Teilifís... Go háirithe .. Daidí !!!!!  Níl aon "jobs" fágtha timpeall an tí!!!!
Now wasn't that just fantastic
Well done kids ... Super job
That's it for this week.
Tiger
Posted by realboyle.com at 12:26 AM No comments:

This week's TV recommendations come from the Spellman family which of course includes my little legend of a godchild Eimear
Aideen Spellman (Age 7)
Ever After High (Netflix)– There are lots of different characters in this based on fairy tales and fantasy stories.  My favourite is Briar Beauty, she is the daughter of Sleeping Beauty and best friend of Apple White.  She plans great parties and can hear for miles but only when she’s asleep!
Eimear Spellman (Age 6)
Hannah Montana (Disney Plus) – Hannah Montana was my cousin Grace Flanagan’s favourite programme when she was younger.  Only 2 of her friends know she is Hannah Montana and everybody else in school thinks she’s ordinary Miley!  She sings in concerts and lives in America. She is 16
Louise Kennedy (Age 29)
The Weather Forecast (Every channel and App)
Shane Spellman (Age 36)
Constant flicking the remote control (every channel on TV, Netflix, Now TV, Disney Plus)
Now wasn't that just brilliant
And not only did the girls write a review
They also drew these lovely pictures, which are class
That's it for this week
All the best
Tiger 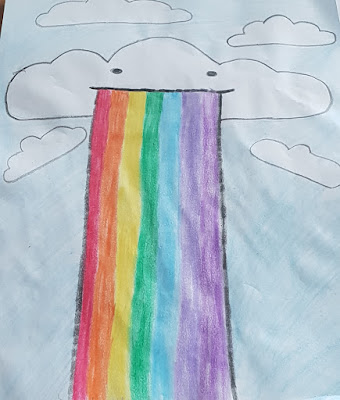 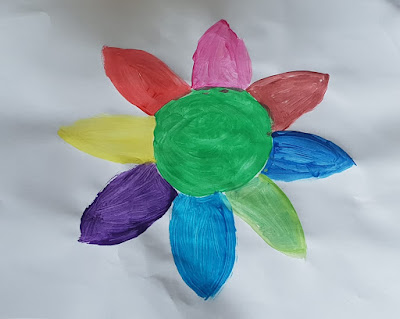 Posted by realboyle.com at 3:18 AM No comments:

Welcome to another Tadhg TV
This week Paul Carroll and his sister Rachel are taking over the blog
Paul’s choice (age 8)
Space Jam - Netflix
love this film and it taught me about lots of sports.
I love Michael jordan and Bugs Bunny and Daffy Duck.
Michael jordan is a basketball player and he is in The Last Dance too.
He is very strong and I like his slam dunks and shooting baskets.
Bugs bunny and his pals play a game of basketball against aliens.
It was really funny. I think people that love sport would enjoy this film. I hope you all like it!
Rachel’s choice (age 11)
Horrible Histories - Netflix
A gory and gruesome guide to the past and with a talking rat as your host you could be in tears by the end of it. It’s history as you’ve never known it with all the horrible bits left in. A fun way to learn about the past as it spans from the Stone Age to World War Two. I think this is a funny and horrible Netflix series and I would highly recommend it for anyone wanting to learn about the past.
P.S. you might need a bucket for some parts 😋😋
Now as you can see the kids did a fantastic job ... Well done
More tadhg tv next week
All the best
Tiger
Posted by realboyle.com at 12:49 AM No comments: