Tadhg tv
Welcome back to another edition of Tadhg TV

Saturday
RTE 1 10pm
All-round to Mrs. Browns
Yes its the mother of all comedies
It's certainly worth watching because I think we all need a laugh these days

Sunday
UTV 3pm
Star Wars v11 The Force Awakens
Now as you all know I love a bit of star wars
And you all should just tune in and transport yourself to a galaxy far far away.

Monday
Fox 9pm.
The Walking Dead
This is one of my favourites it's set in a world where there are only a few survivors and they are all fighting off zombies know as walkers
Ha I hope the walkers are keeping their social distance!!!

Tuesday
Sky One 8pm
The Flash
Now it's a big week for comic book fans
Yes its the week where all the superheroes come together for an epic 4 Part story on Sky One at 8pm Monday to Thursday.

Thursday
Disney Plus
The Guardians of the Galaxy
Now the kids are at home this weather and some of you might have subscribed to Disney plus
This is one of the best marvel movies on
It
It's full of action and laughs.

Friday
Channel 4 10 pm
Friday Night Dinner
This is very much in the same vein as the Inbeteweeners. 2 adult sons come home every Friday for dinner and everything that can so wrong does go wrong

Fair City is only on twice this week
Well as they say every cloud has a silver lining
Now was my birthday last week  ... I'll tell ya where I went
I went to the kitchen, then to the sitting room and then I went all out and went to the back garden
Now a very good little buddy of mine drew a picture of his favorite TV character
So here is 11 year old Dara McDonagh's drawing of Spider Man 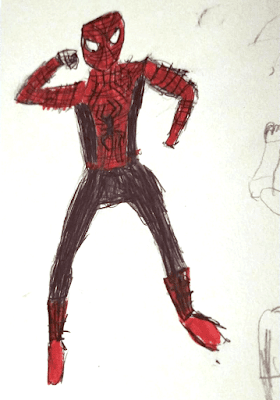 Posted by realboyle.com at 6:59 AM No comments:

Saturday
Tv3/ virgin one 7pm
Ant and Dec Saturday night takeaway
My favorite cheeky chappies are back  my sure about the live audience and fluer East  running around the UK but it will definitely be a good laugh and the way things are gone laugher is very important.


Monday
BBC 1
11.45
This Country
This is one of my favorite new comedies
It's a spoof documentary about 2 people in their 20s living in the Cotswolds in the UK
It's great stuff


Tuesday
Channel 4 pm
The Great Celebrity Bake-off
What's better than the bake-off a celebrity version of it and I mean proper celebs who we all know and love. Hopefully, there will be no soggy bottoms.


Wednesday
Gold 10pm
Gavin and Stacey
A modern classic
This is season 2 episode one so the newlyweds are back from honeymoon but what are they coming back to?


Thursday
Film 4 9pm
Logan
This is the last movie starring Hugh Jackman as a wolverine. it's a great comic book movie with lots of action Jackman definitely got the claws out anyways.


Friday
Sky one 8.30
Modern Family
Another great US comedy with a fantastic class and great scripts now unfortunately, this is the final season but they are going out with a bang.


Fair City
Wayne doesn't want junior to go back to school, because he was worried the child would have more sense then he does.
I notice Paul Brennan missing in action this week
It must because he is usually in a lision with a lady and with the corona virus he is curtailed.


That's it for this week

Posted by realboyle.com at 8:15 AM No comments:

Saturday
Utv 7pm
The Masked Singer
Well this is a reality show with a difference in that all the celebrity singers are wearing full costumes, for example, a unicorn so we don't know who they are and even more not even the judges know until the end of the show when the contestant reveals themselves upon being voted out.


Sunday
BBC 1 7.10
Doctor Who
This is certainly a tadhg TV favorite now it was on last year and I was confused because I thought there was no one playing doctor in the show but then in the last episode, I finally copped there was a female doctor and I must admit she is a very good doctor too.  The legend Bradley Walsh is in it as well ...Will the doctor and gang escape the Daleks? Well, the chase is on.


Tuesday
Network 2 9pm
The Godfather of Harlem
This is a brand new show about the rise of Bumpy Johnston. Who of course was the predesaser to the American gangster himself Frank Locus


Wednesday
RTE 1 9.35
Operation Transformation
Great show encouraging people to get fit. I doubt even Harry Potter would have difficulty
transforming me at this stage


Friday
Netflix
Gavin and Stacey
After watching the sitcom's  extremely well-recieved return on Christmas Day I thought I would watch some of the earlier episodes and they are priceless even with James Corden in them.
That's it for this week


All the very best
Tiger

Posted by realboyle.com at 9:53 AM No comments:

Saturday
UTV
8.30
Guardians of the Galaxy Volume 2
Time to kick back open up a selection box and watch a movie for all the family now it is a superhero movie based in the marvel universe but you will enjoy it has everything from Kurt Russell to a talking raccoon and a fantastic soundtrack.

Sunday
BBC 1
9 pm
The trial of Christine Keeler
This is another BBC 6 part drama about a model who had an affair with a tory politician  in the 60s but of course, nothing like that would happen nowadays.

RTE 1
10.30
Mrs. Browns Boys Christmas Special
This is a repeat of the Christmas day episode which I really enjoyed
It's basically a look at what would happen if Angus Brown wasn't born like the movie it is a wonderful life.

Monday
RTE 1
3.40
Back to the Future
This classic movie trilogy is been screened on RTE over 3 days
They were probably my favorite movies when I was young so the storyline is a teenager befriends a scientist Dr. Brown
Who has a time-traveling car?
If you or your kids watch Rick and Morty
They would love this movie

BBC 1
11. 30
Gavin and Stacey
This is a repeat of the Christmas day special well 11 million watched this show which was  10 years in the making featuring some absolute class scenes between Smithy and Nessa. It's a triumphant return for one of the first modern comedy's

Tuesday
RTE 2
6.25
Mrs. Doubtfire
Another classic comedy with the great Robin Williams as a separated father who dressed up as a Scottish nanny so he can mind his kids and it's just brilliant.

Channel 4
7.40
The Great Festive bake-off
A celebrity version of the bake-off with none other than the cast of derry girls taking part.

Sky Sports Darts
8pm
it's the big finale from the ally pally
I never played darts myself but I do have the right build for a darts player.

Thursday
BBC 1
8pm
Britain's Best Cook
Mary Berry is back with a new show searching for Britain's best cook with a contestant being eliminated each week.

BBC 1
9pm
Dracula
Another BBC drama you can really sink your teeth into.

Friday
Carrick Cinema
Star Wars Rise of the Skywalkers
Right so I am a massive Star Wars fan but I cannot recommend this movie enough with action comedy, drama, romance all is the one movie now this is the last star wars movie well at least for the moment anyway.

BBC 1
8.30
The Goes Wrong Show
Comedy in which a local drama group put on a different show every week and everything that can go wrong will go wrong.

Posted by realboyle.com at 2:16 AM No comments:

Welcome once again to another week of televisual treats

Sunday
ITV 9pm
I'm a Celebrity
Well, it's a jungle out there and this the final I enjoy Kurt from Corrie and fair play Caitlyn Jenner she's some man for one man.

Monday
Network 2 9.30
The Young Offenders
The comedy show of the year is back and it's in flying form. They give Sergeant Healy an awful time of it but it's just pure fun and all filmed in Cork.

Tuesday
Network 2 9pm
Ted 2
The walking talking teddy bear is back. The movie comes from the mind of Seth MacFarlane who is behind Family Guy so it certainly is not a kids movie.

Wednesday
BBC 1 9pm
The Apprentice
It's the big one yes its time for the dreaded interview  stages
The candidates are interviewed by a number of Alan Sugar's aides.
Lord Sugar, of course, makes the final decision which is will he eat that with or without salt.

Thursday
The Treehouse with Danny Baker, podcast
My Saturday mornings have not been the same since Danny was sacked by BBC 5 live for making a monkey of himself on Twitter
So his back doing what he does best in a twice-weekly podcast filled with the usual fun and games you would expect from Danny

Posted by realboyle.com at 12:13 AM No comments:

Saturday
BBC 1  7.05
Strictly
It's the big week in strictly live from the tower ballroom in Blackpool. Who will be waltzing off the show and who will be given another cha cha chance to impress the judges.

Tuesday
Sky Atlantic 9pm
Ray Donovan
It's great to see this great show back on our screen. John Voight is fantastic in it

Thursday
Streaming service of your choice
The Mandalorin
Now I'm a massive star wars fan and the new movie is not far far away but in the meantime
This  new show based in the Star Wars Universe is worth a look. Now the mandalorins are a race of bounty hunters I prefer Twixs myself but I still enjoyed the show.

Posted by realboyle.com at 11:58 PM No comments:

Saturday
ITV
8.10
Celebrity X Factor
The X Factor is back this year but with a little bit of a twist it features so called celebrities so at least we do not have to sit down and listen to a contestant saying I am doing this for my dog who passed away 6 months ago.
I wonder who will win it will it be the ex footballer ? The lady who appears on a quiz show or the person who was in GLEE.

Sunday
BBC 2
11.10
They Shall Not Grow Old
I honestly cannot recommend this show enough it is just fantastic it uses footage from World War 1 and match it is with audio from the Imperial War Museum.
I think every child going to school and studying history should have to watch this show because it's so well done the story is brought to life by Peter Jackson who is in The Hobbit of making good productions .

Monday
RTE 2
9.30
The Young Offenders
The lads from Cork are back for a second season and if it is half as good at the first one we are in for a right good laugh.

Thursday
Channel 4
The Accident
This drama Stars  Raquel from Coronation Street. So the story is a group of teenagers play in an abandoned mine and and hence the title are involved in an accident I am sure that Channel 4 Executives are looking at the viewers reaction and viewing figures and thinking that was an accident  commissioning the show in the  first place

Friday
BBC 1
7.30
Children In Need
Yes it's that time of year again from BBC. Pull out all the stops for a night of entertainment comedy and music all in aid of very worthy causes.
Its hard not to think of the legend himself Terry Wogan while watching this as you all know this was always his annual TV outing

Posted by realboyle.com at 12:02 AM No comments: